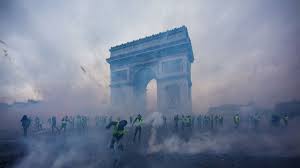 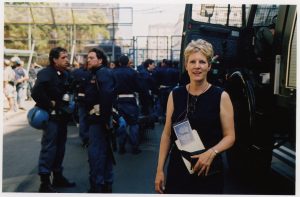 Over the years when I was a TV News Correspondent, I covered dozens of demonstrations and protests, some of which turned violent as they have in Paris.

For instance in 1991, I got caught in a protest in Harare, Zimbabwe where students rallying against government corruption capitalized on the fact that their African city was host to multiple heads of state, including the Queen, at the Commonwealth Summit.

I headed out to get the university to get some interviews when my camera crew and I got caught up in the escalating demonstration.

Riot police fired shots into the air and began throwing cans of tear gas at the students.

One landed at my feet. The vile yellow fog temporarily blinded and threw me into a vicious coughing fit.

Disoriented, I got separated from my cameraman and pulled deeper into the uproar. It took me a terrifying half hour to find my way out and for the situation to return to some measure of calm.

Arriving back at the summit, I then had to rush to a news conference being held by British Prime Minister John Major. I was late and must have looked a fright because the PM did a double take and winked at me. I stupidly winked back – a reflex I assure you, and yes, that harmless interaction made for a few lines of gossip in a Canadian newspaper a few days later.  “Canadian Lady Di Attracts Eye of British Prime Minister.” I kid you not.

(This pic below was taken at the summit. Notice not too many other female reporters at that time!) 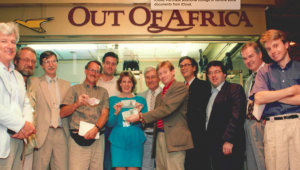 BUT to return to make my point – that isolated protest was just the beginning of growing social unrest in Zimbabwe. Sadly, Zimbabwe was run by a dictator who ruled with an iron fist. He clamped down hard on the rights of its citizens, wreaking havoc and causing political instability in that country for years to come.  Protests  have led to the same outcome in tightly controlled countries like Iran, Egypt, Syria, Yemen, Libya and China. 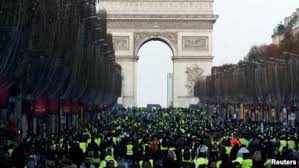 Thankfully France is a democracy. And while the French President struggles to neutralize the conflict, at least he is listening and trying to find a peaceful resolution, but likely at the expense of  the agenda he was elected to deliver – accelerated growth and economic reform.

Protests are an instrument of the right to freedom of expression in a democracy.  But the violence — hurling stones, burning cars, smashing and looting stores, and defacing cherished monuments, not only weakens its legitimacy but hurts the very citizens the protesters are fighting for. It is heartbreaking to see in such a beautiful city.

The protests seem to be waning.  Let’s hope calm returns to Paris and France soon.