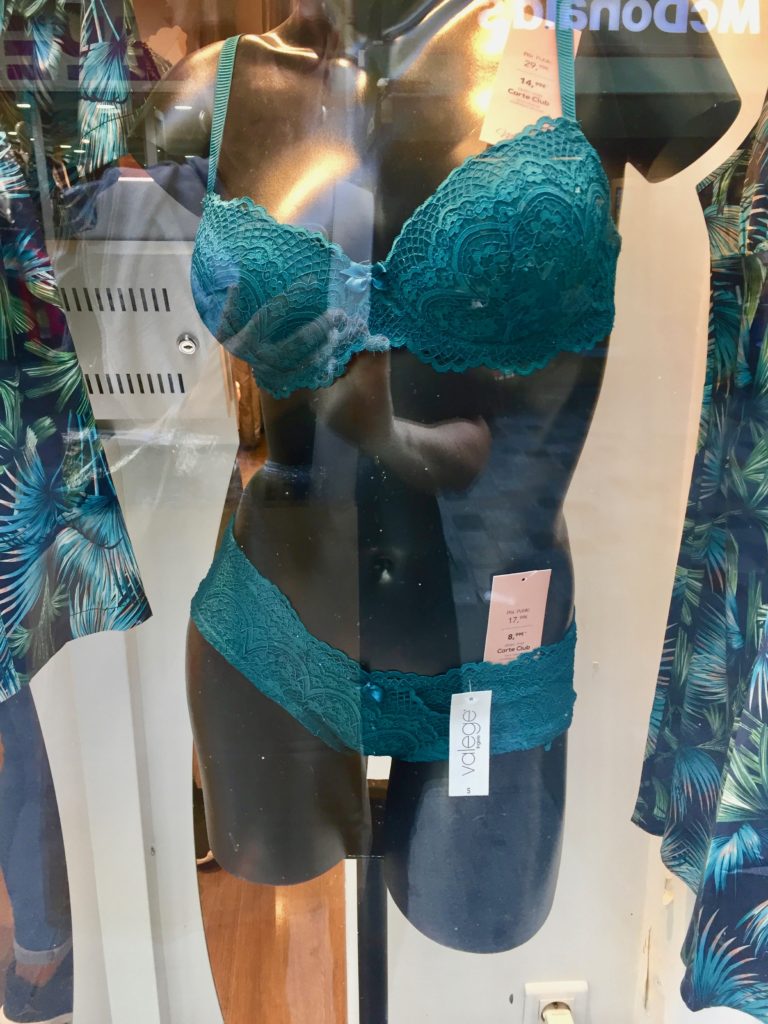 How many of you are planning to put on a beautiful lace or satin bra and panties under your clothes today, tomorrow, and every day?

I bet that if I were to ask a Parisian woman the same question, the answer might be wildly different.

That’s because most of us wear underwear, and in Paris, women wear lingerie.

This is pretty much how my conversation started with Kathryn Kemp-Griffin, author of Paris Undressed: The Secrets of French Lingerie. 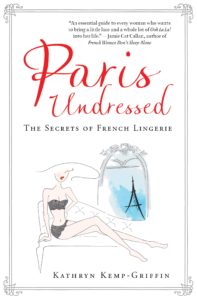 We had decided to meet for coffee in a funky Paris cafe called Merci and three hours later I will still be enraptured by what Kate (as she prefers to be called) was talking about. 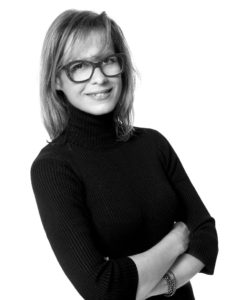 Katherine Kemp-Griffin lives in a village north of Paris called Saclas with her husband and 5 children.

“Do you remember your first bra?” Kate asked me.

It happened as a result of this stupid boy sitting behind me in my grade 8 class. He leaned forward and started to draw in thick black felt marker an outline of the undershirt I was still wearing under my blouse.

I ran home sobbing to my mother who the next day took me to the nearest department store.

My Triple AAA “training bra” was white, itchy and unattractive,” I told Kate.

“And think of how that made you feel!” Kate added.  Like it was going to be embarrassing to reach womanhood was what I was thinking.

Then Kate described the experience a young French girl has in this situation.

“It’s an event!” says Kathryn. The girl’s mother, maybe even her grandmother and aunt, will escort the young lady to their favourite lingerie boutique. A lingerie expert will help her pick out the most beautiful bra she can find (and one that fits!).

Thus begins a life where the young woman “inhabits her body and her life with effortless grace and sensuality,” says Kate. 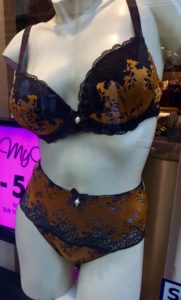 There are lingerie stores all over Paris, where women buy lingerie not as a luxury to be worn once in a while (like now during the holiday season or on a hot date where sex is the goal), but as something that makes them feel good.

And I bet that you do not see too many shop windows in our cities or towns where displays have advertisements that say — Libérer vos seins/Liberate your Breasts!

And I don’t think they mean “go bra-less” which made me curious enough to want to go in and have a look!  But I didn’t! I was too intimidated. 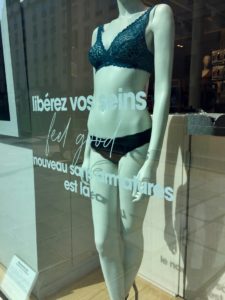 French Lingerie For Me!

Oh, there is so much more to talk about on this subject so have a look at my experience buying a French bra in my blog post

A Few Things About Kate –

How about that as an alternative to the usual Paris tourist attractions?

2. Her book is funny, witty, and informative and will alter your perspective. (I discovered I am wearing the wrong bra size!)

You can buy her book HERE!

3. Kate is also the founder of Pink Bra Bazaar, a charitable organization dedicated to breast health education and supporting women with breast cancer.

Every year, women assemble at the Eiffel Tour to do a bra toss to raise awareness and show their support.

Kate wasn’t sure anyone would show up for the first event but hundreds of women did, and the event has now grown to other cities around the world! 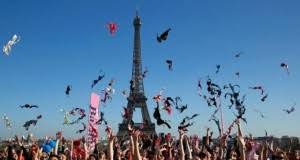 Disclosure Policy: This site uses affiliate links which may generate small commissions based on clicks and purchases. Any products that I giveaway are personally purchased by me unless otherwise specified. I write all content on my site unless otherwise specified. And I respect the privacy of my subscribers and do not share their information with any other party or organization.