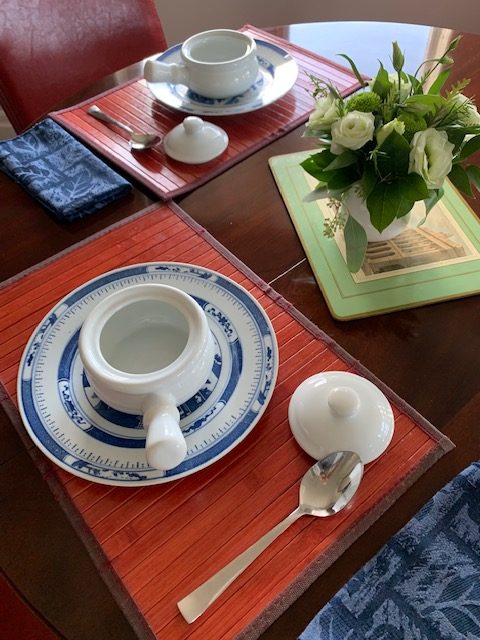 When was the last time you had French Onion Soup…although in France, I guess they just call it onion soup?

In my case, it was ages ago, not as far back as the 18th century when it was invented,  but certainly before I worried about all that salt, cheese and bread.

I also had never made it myself, preferring to order it in a restaurant delivered to my table without all the preparation.

However, as the weather starts to turn chilly, I am craving comfort food and decided that French Onion Soup would be my next French Test Kitchen Recipe. 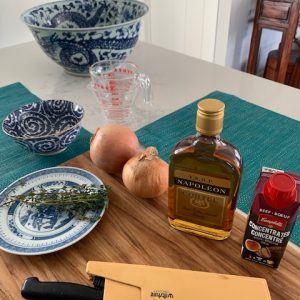 First I needed to find French Onion Soup bowls which I felt were crucial to the process.

Did I have any?

Nope. Gave them away along with those escargot dishes with the little indentations for the snails and garlic butter.

So I asked three of my friends and neighbours.

“Sorry Diana, I gave those away!” was their answer.

Gave them away eh?

So I made a trip to the ReUse Store — where an entire shelf was dedicated to French Onion Soup bowls of all sorts.

In fact, it looked to me like they had more of them than any other china or crockery.

Now I know why.

But hey, I was in business! I bought two of them.

I enlisted my friend Peg to be my assistant and together we made French Onion soup the way we remembered it — with slow-cooked caramelized onions, beef broth, Cognac, and Swiss Cheese melted over a slice of French baguette. 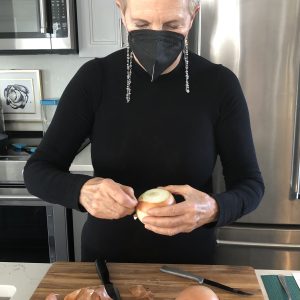 I found another use for my mask while chopping onions! (Photo by Peg)

It became our lunch that day, and a most satisfying one at that. 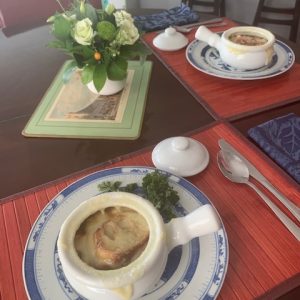 My Recipe for French Onion Soup

A few tablespoons of Cognac

A few sprigs of Thyme

One Teaspoon of Dijon Mustard

Salt and Pepper to taste

Mix half the butter with the thyme, mustard and a tablespoon of Cognac to make a paste. Set aside

With half the olive oil and the rest of the butter, sauté the onions slowly over low heat for almost 20 minutes.

Take your time as the process to caramelize the onions is key to extracting the best flavour.

Add the flour and coat. 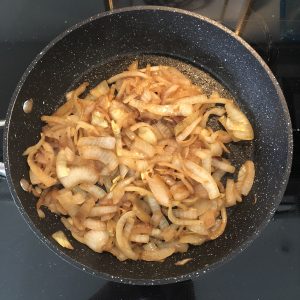 This needed another 5 minutes to caramelize! Photo courtesy of Peg.

Add the sugar over medium heat.

Your onions are ready.

Add the 4 cups of broth to the onions and then add the paste for full flavour.

Bring to a slow boil. 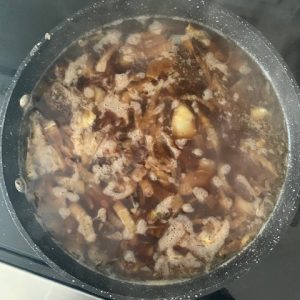 In your French onion soup bowls (that you have discovered deep in your closet or found at a ReUse store near you), assemble a toasted slice of French bread at the bottom of the bowl over which pour a little Cognac.

Ladle in the soup until full.  Add a second slice of toasted French bread on top. 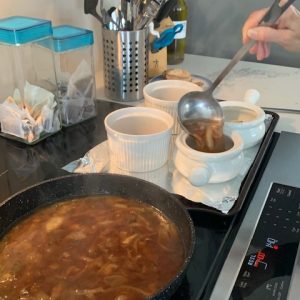 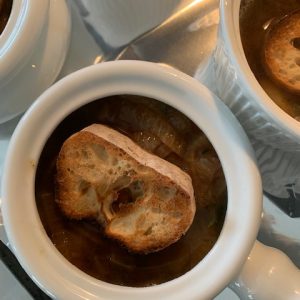 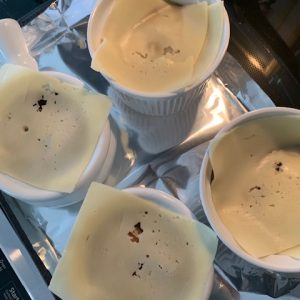 Cover with Cheese on Top

Add two slices of or as much grated cheese as you desire on top of each soup bowl and broil for a couple of minutes until bubbly and golden brown.

Serve alone or with a salad … and you will be right back in a bistro in Paris on a cold and blustery day!

Send Me Your Comments!

What has been your experience with French Onion Soup?

Love to hear from you. 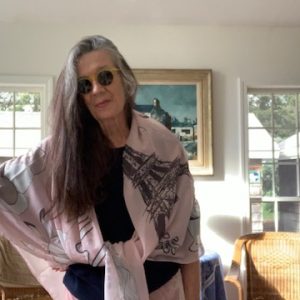 Julia Fish is so chic!

Winner of the My French Gift Box

Yes, we have a winner! For my annual members, I do FOUR Giveaways a year, one every quarter. This fall I did a draw for my personally selected French Gift Box with seven items that scream Paris and France.

The winner of the gift box was Julia Fish from Madison Connecticut!

Congrats Julia, and thank you for being such a loyal follower of www.womanofacertainageinparis.com

Julia was kind enough to send a picture to let me know her gift arrived.

She is sporting the pink Paris shawl. Below were other items in the box. 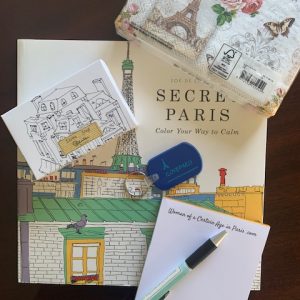 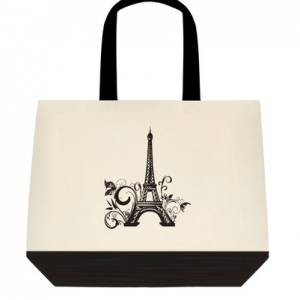 The last Giveaway for Annual Members for 2021

is coming up at the end of November!