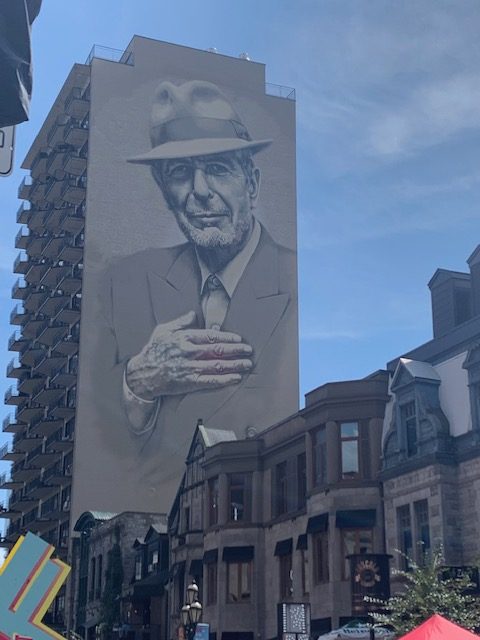 Note about this photo at the bottom of the blog!

Before I left Quebec this visit, I found myself reminiscing about my first experiences in la belle province.

Growing up I always felt that I had unfinished business in the province of my birth and eventually it drew me back.

Previously, you’ve read about my experiences learning the French language, well, this is where it all started. (The previous blog was entitled Zut Alors!) 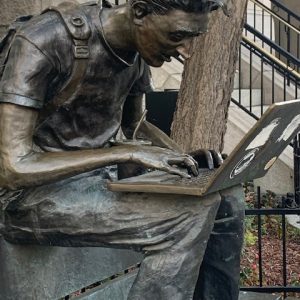 For my third year of undergraduate study, I received a fellowship to study at a French University in Sherbrooke, Quebec, a couple of hours south of Montréal and north of the U.S. border.

I figured it was time to throw myself right into a French milieu where LIVE people would be speaking French to me, all the time.

After all the hours of mind-numbing language lab practice in an artificially controlled environment, I was ready for the real thing. 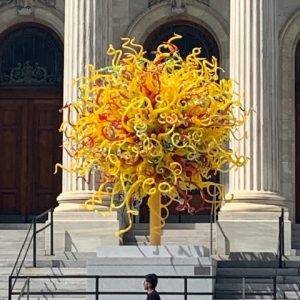 Also on Sherbrooke Street, I loved seeing this sculpture called “The Sun” outside the Montreal Museum of Art composed of over 1,300 rays of blown glass.

Quebec French for “Don’t Give Up!”

On arriving in Sherbrooke, I and another anglophone student decided to go and sit at the outside gathering place on campus, called the Agora, and see what would happen.

I thought we might just sit there alone all night but as it was getting dark some very friendly French guys noticed us and looked as if they were building up the courage to approach.

After a short discussion, they sent over their plucky friend Serge, who by the way was the only of the group that spoke no English at all.

Assuming we were also francophones, Serge began to engage us in rapid-fire…

Well, it was certainly Greek to me!

Imagine what was going on inside my head.

But I was like a mechanic with a toolbox full of tools that I could identify and name but without a clue how to use them.

Suddenly, coming into glaring focus, was this lovely guy speaking to us in a language that did not remotely sound like any French I had heard before, certainly not anything like that monotone voice on those hours of excruciating tapes in the language lab.

However, I realized that voice had spoken relatively slowly and was from France. Whereas Serge was speaking, Quebec French, a language that still used 16th-century pronunciations from the motherland,  and had a twang all its own.

When we explained slowly in very stilted formal French to Serge that we spoke only a little of his mother tongue, he looked as panicked as we felt and quickly motioned for the others to join us.

I don’t remember too much of what happened after that, (I think beer may have been involved) except that one of the guys sat next to me and we had a painstaking conversation in Canada’s second official language.

I was so grateful to him for his patience and to all the other students that year who put up with me.

I also remember that year as being one of the very best of my life.

Have you experienced the differences between French

from France and Quebec French?

Would love to hear your stories.

Please Comment Below so that we can all read them!

NOTE: Featured Photo at the top of Leonard Cohen (1934-2016)* I gasped when I turned onto Crescent Street in Montreal on this visit and saw this enormous mural of the famous singer-songwriter and poet Leonard Cohen, a native of Montreal.  (For those of you who might not know Cohen, he wrote the song, Hallelujah, performed by many and considered one of the most famous songs of all time.)

Cohen was the height of cool when I was at school in Quebec. I really like how his hand is over his heart implying that he always remembered where he came from. 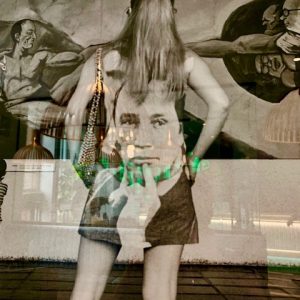 NOTE: This photograph I found on display on the wall of a hotel café in Old Montréal.

It showcases the face of Pierre Elliot Trudeau  (father of the current Canadian Prime Minister Justin Trudeau) who took the country by storm in 1968 when he swept to power in what was called “Trudeaumania. ”  Many of us, including me went gaga over him.

No one had ever seen a “swinger” like Pierre Trudeau as PM, handsome French, and irreverent, a new leader for a new time. PET. as we called him served (15 and half years) during the time I was in Sherbrooke.

I sure wish I had this t-shirt! 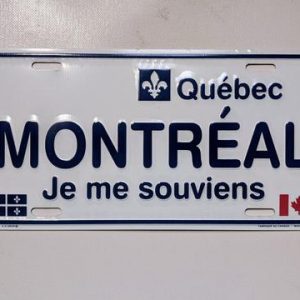 *Je me souviens | I remember

Note: In 1978, Je me souviens replaced the tourism-oriented motto

protect and promote Quebec’s heritage, and its special place within Canada and North America.

← Dior in MontréalParis In Our Own Backyard! →