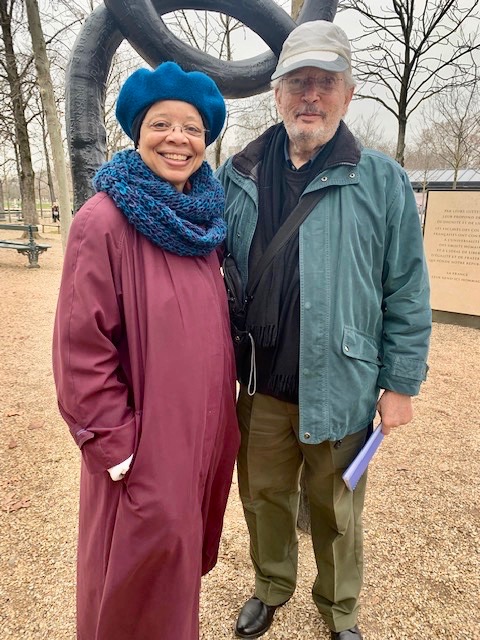 Meet two of my newest acquaintances in Paris, Dr. Monique Wells and her husband Tom Reeves.

I found this delightful couple when I was looking for a tour that would introduce me to Black Community History in Paris.

I got curious following the internment of American-born French entertainer Josephine Baker at the Pantheon at the end of November.

I found what I was looking for on the couple’s website EntreetoBlackParis.com

The website is a tribute to their relationship; their mutual love of Paris (they are originally from the U.S.) where they have resided for almost 30 years; and to a niche that they felt was underrepresented and in demand for tours and activities that feature the history, culture, and contemporary life of African Americans and the larger African diaspora in Paris.

My Black History Tour In Paris

So, on a cold and drizzly morning, I took their tour.

It was Tom, (Monique joined us later) who arrived masked against COVID and holding a large binder. 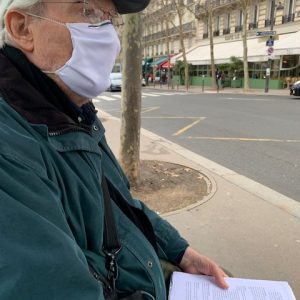 Tom Reeves is ready to start the tour.

Our rendezvous began on Boulevard. St. Michel in the Latin Quarter in front of one of Paris’ most famous jazz clubs, Le Petit Journal.

Although it is closed in the mornings , I recognized it right away, because my friend Shardie and I had gone there for dinner and to listen to music on a previous trip. 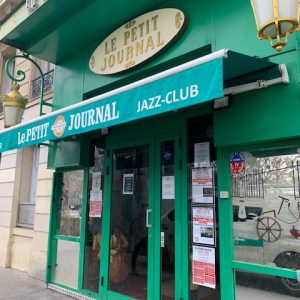 I remember that it was the quintessential Paris club.

Once through the front door, we wended our way down into a narrow cave with small tables on either side and surrounding a small stage crowded with musicians.

The music harkened back to the ’20s and ’30s of New Orleans, Chicago and Harlem jazz, where some of the musicians were African-Americans. 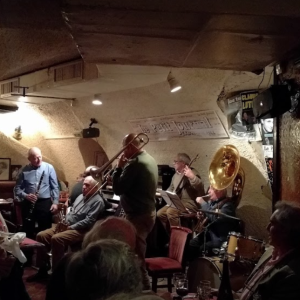 With that as our starting point, Tom walked me through the lives of several African Americans who had migrated to Paris since the 19th century pointing out the  cafés and restaurants and other spots that they frequented.

These included prominent African American writers, who arrived in Paris, often to escape racism in the United States.

Richard Wright (Born 1908, near Natchez, Mississippi, U.S.— Died, 1960, Paris, France), the novelist and short-story writer who was among the first African

American writers to protest white treatment of Blacks, notably in his novel Native Son (1940) and his autobiography, Black Boy (1945). 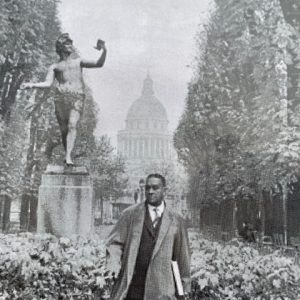 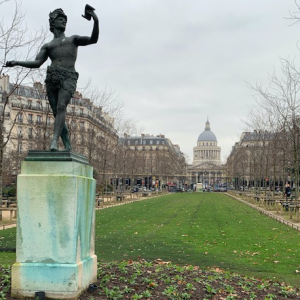 I took this picture on my walk revelling in the fact that the famous writer had also walked on this very spot.

Baldwin spent his formative years as a writer in Paris during the late 1940s and 1950s, renting a small room nearby and working on his first novel, Go Tell It On the Mountain (1953). 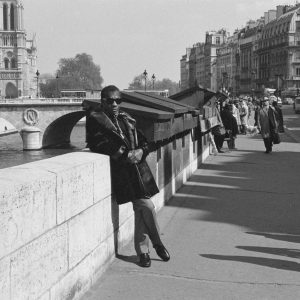 James Baldwin by the Seine

As we continued our walk around the periphery of the Luxembourg Gardens, we stopped at the Petit Odéon Theatre.  There Tom told me about American playwright Adrienne Kennedy.

Kennedy was best known for Funnyhouse of a Negro.

In 1968, a French adaption of Adrienne Kennedy’s play was featured at the theatre. 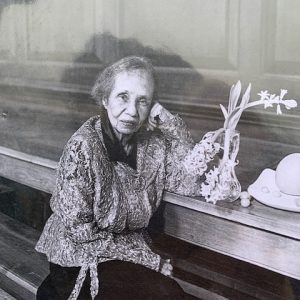 The tour was a great introduction to Black History in Paris, and there was so much more to learn.

It certainly sparked my interest to explore further into this somewhat hidden world.

Thank you, Tom and Monique! 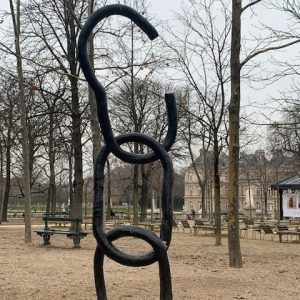 Replica of Slave Chains (now broken free) monument the Luxembourg Gardens where we finished the tour.

Find out here about  Entrée To Black Paris

Tom and Monique also publish a free, weekly review of Paris restaurants at the following link:parisinsights.com/restaurants.php. 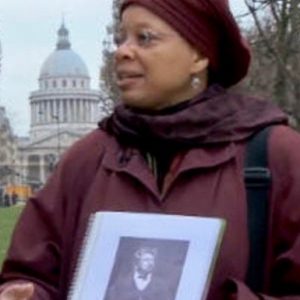 Monique is holding a picture of Alexandre Dumas, (1802-1870) who arrived in France from Haiti (then called Saint-Dominigue), writer of multiple works chief among them The Count of Monte Cristo.

A remarkably accomplished Woman of a Certain Age in Paris!

Writer of the multi-award-winning Entrée to Black Paris blog, Dr. Wells created twelve of ETBP’s 13 walking tours.  She was named an Outstanding Woman in Travel Research by Women in

She is the U.S. Delegate for the Académie de l’Art Culinaire du Monde Créole (Academy of Culinary Art for the Creole World).

And she is the creator of Paris – An Afro-centric Perspective, the only continuing education course for travel professionals that features African diaspora Paris. 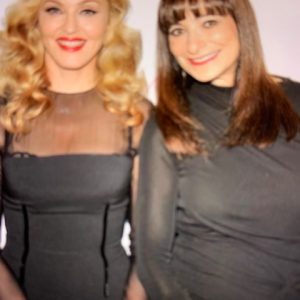 No one has done more to bring the exotic world of fashion and “haute couture” into the homes of everyday women than 69-year-old TV personality and fashion editor Jeanne Beker.

Jeanne is best known as host and producer of the internationally syndicated (130 countries) TV program “Fashion Television” (FT) which ran for 27 years.

Another great story about a woman of a certain age

making the most of every chapter of her life!

NOTE: If you have subscribed for the Annual Series, you ALREADY are registered for a ticket! You will receive the link a day before the interview… so make sure you save the date!

*Note:  There is a small administration fee for the individual interviews (22.50 CAD/18 USD) if you are NOT an Annual Member.

An Annual Subscription includes Giveaway Draws and other benefits at 135.00 CAD/106.00 USD) These fees help in part to pay for this blog, the website, gifts and giveaways, and the production of the series as well as the recordings.