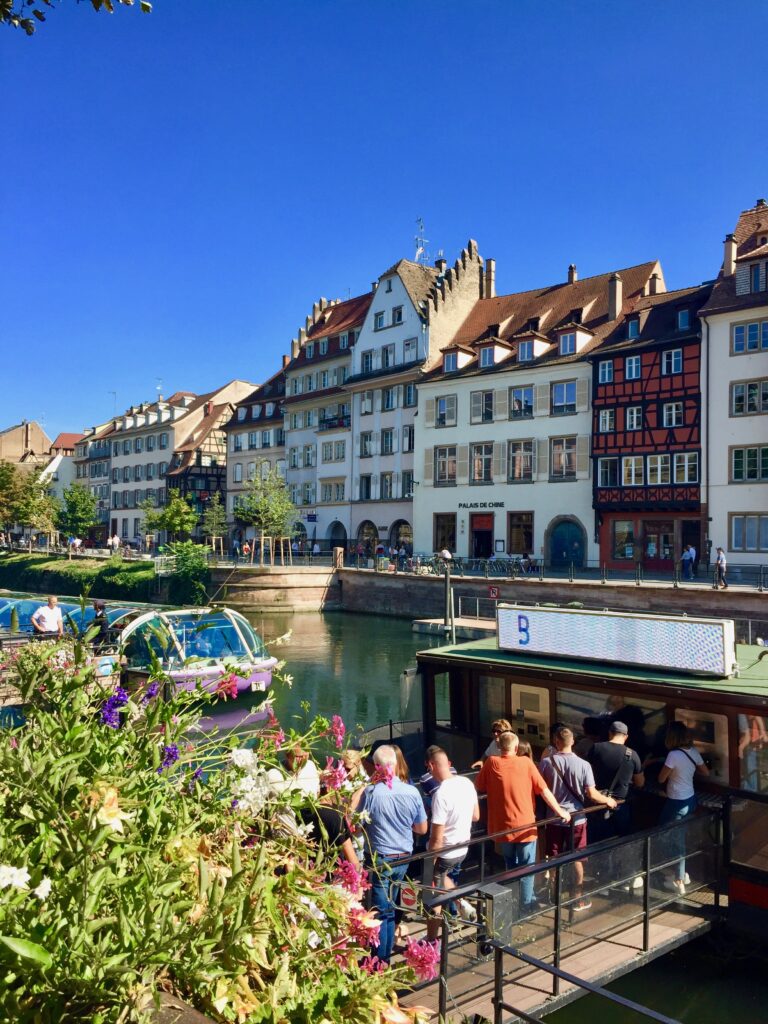 And welcome to a new season of Woman of A Certain Age In Paris!

Lots in store for you in the coming months making the most of virtual travel until we can do the real thing again.

I thought I would start off with a fall visit to Strasbourg!

In just under two hours by train east from Paris in Alsace, you can be strolling the streets of Strasbourg, a pretty medieval city right on the border between France and Germany.

The historic part of this city is actually on an island called Grande Île surrounded by the Ill river which runs parallel to the Rhine about 4 kilometers away. 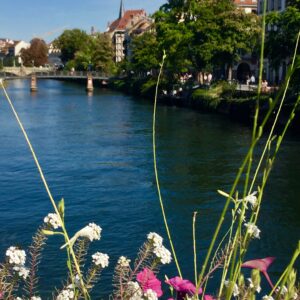 September is the best time to be there when the temperatures are still warm but the air is crisp and clear.  And despite all the tourists, local life seems uninterrupted and serene. 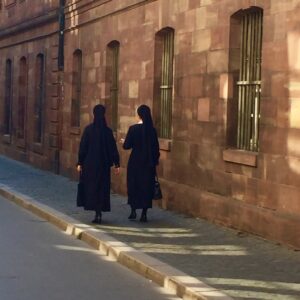 Two nuns on their way to the cathedral

I was interested in seeing two things in particular.  The famous cathedral or La Cathédrale Notre-Dame de Strasbourg, whose origins begin in the 12th century, was once upon a time the world’s tallest building, and is still visible almost anywhere you look in Strasbourg. 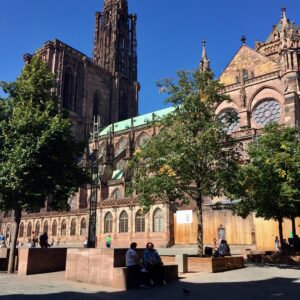 The facade of the famous cathedral in Strasbourg is made of sandstone giving it that pink tinge. 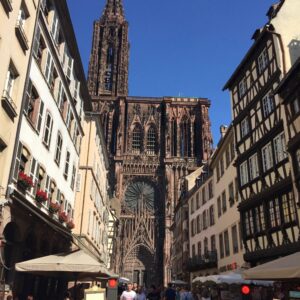 You can see it from almost every street.

Of even more interest to me was its astronomical clock, a Renaissance masterpiece of technology that my friends Astrid and Jean-Yves told me was a must-see.

In truth, we raced to get inside the cathedral in time to see the animated figures do their thing once a day at 12:30 pm. 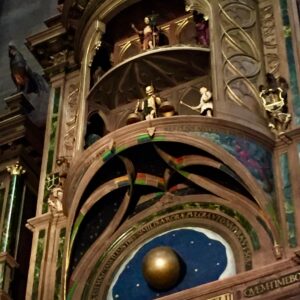 Above the three King’s clocks of various sizes are animated mechanisms that are the combined work of artists, mathematicians, and technicians over the centuries.

There are several rows of figurines. In the top row are the 12 disciples that roll past Jesus.

In the next row, four figures depicting the different ages, child, teenager, adult, and old man, parade before death.

Somewhere in the second clock, a rooster also crows, and then the bells begin to ding.

I had to jostle a little to find a spot to stand and look up, way up, to delight in this daily performance.

Over a loudspeaker, there is a call to hush as the din in the church rises with anticipation.

Taking pictures is almost impossible so I have added a video. 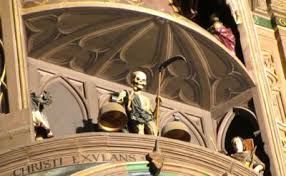 The parade before Death. Kinda spooky!

Another main attraction is the Kammerzell House, one of the oldest timber-style framed houses in Strasbourg. It was built in 1427. 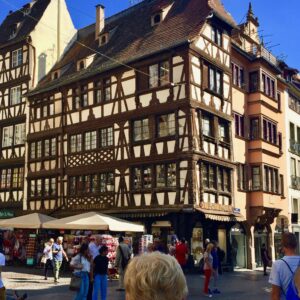 Kammersell House is named after a local grocer.

Strasbourg is also a fine place to go if you are really really hungry for German fare, especially for protein and starch.

Here is the lunch I ordered.  It was ample enough to have fed myself and my other two companions. I needed a doggie bag. 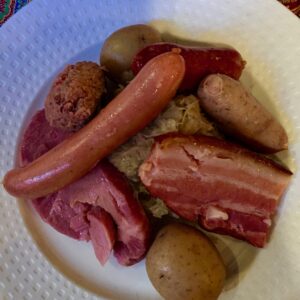 A massive plate of choucroutte garnie, not a green vegetable in sight!

I want to thank my new subscribers to my blog! I promised a Free Memoir to the 10th person who signed up this month.

That winner is Lesley Caygill from Barkwick, North Yorkshire, England.

Leslie has chosen Do Not Go Gentle, Go to Paris by Gail Thorell Schilling  (You can click on the link to purchase it!)

The perfect memoir for women of a certain age. Rattled by fears that she is losing her keys, her looks, her job, and her sweetheart, Gail, 62, rashly announces that she will go to Paris, a dream postponed for 40 years. So begins her solo journey through France, living like a student as her budget often dictates, but always finding a silver lining in the choices she makes.

You will find yourself wondering how you would fare on such a trip and cheer Gail along with her optimistic, infinitely curious nature as she rebuilds her self-confidence and gets comfortable with how to age in her own way. 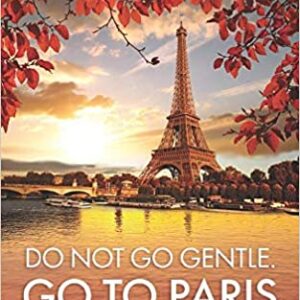 Here are the other nine new Subscribers.  Thank you and welcome to our global community of women who love Paris and things French!

What Memoir Have You Read Lately?

Don’t forget to check out my BOOK CLUB PAGE to keep finding new memoirs about Paris and France written by women, the most comprehensive list you will not find anywhere else!

← Walking the Labyrinth in ChartresDining Out In Paris – What’s On MY Wish List? →