I have to say something about French bread. Because my love affair with Paris and France began with the bread.

Like many people, I tend to watch how much bread I consume, and I never eat white bread anymore. However when I am in Paris, forget about it!

If you are NOT going to eat French bread (or buttery croissants) while in France, I sincerely suggest you just get back on the plane! 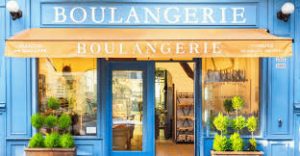 Now having said that, I stood outside my first neighbourhood boulangerie in Paris a few time before I had the courage to join the long line of people waiting to order a mouth-watering crusty French baguette like so many Parisians do on a daily basis.  And everyone has their favourite bakery! 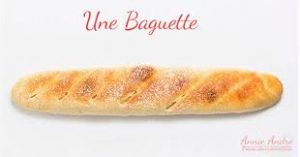 How to Order a French Baguette

I know that if I just had said “une baguette s’il vous plaît“ that they would have understood me and given me the simplest option.

But knowing the French, I figured that the choice was perhaps more nuanced than this.  So I did some research before I ventured in for real.

La baguette is a ubiquitous French staple, but there are, in fact, different kinds depending on the baker, how well the bread has been cooked and what ingredients are in it. For instance, connoisseurs can choose between a baguette that is well done|“bien cuite” and not as well done | “pas trop cuite,” (the difference is in the colour and crunch of the crust). 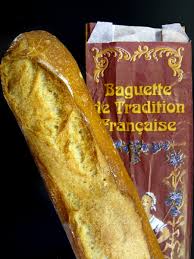 No wonder I was nervous, but honestly, I discovered that you don’t need to get into all that.

To make it easy, there are really two simple choices.  There is la baguette classique or la baguette tradition.  The difference between these two are the ingredients. The latter is a little more expensive because it is guaranteed to have only four ingredients, flour, salt, water and yeast, and absolutely no additives.

So finally in I went, joined the line, head held high, and when it was my turn, I crisply said “une tradition s’il vous plait!” And sure enough, the lady turned around, picked a lovely fresh bread stick, still warm from the oven, from one of the shelves, wrapped it in a slice of wax paper, and asked for 1.30 Euro/$1.50 USD/$2.00 CAD. 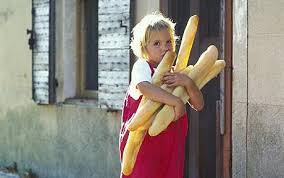 What Do You Call The Heel of a Baguette?

To seal my success, (it felt so good to feel like I had mastered another French ritual) I ripped off the end of the baguette, known as ‘le croûton’ or ‘le quignon’ and devoured it.

French bread only lasts one day fresh like that so why wait to get home?  It is still one of my greatest pleasures taking that first bite of a fresh baguette.  Bakeries usually bring out the bread first thing in the morning and also in the afternoon as people pick some up on their way home from work.  This is when the bread is the sweetest.

*I credit the baguette as a big reason why I gained 30 pounds the year I lived in France. Well, maybe it was the cheese and wine that went along with it.

Still — looking back, worth every pound!

NOW FOR THE BIG NEWS! 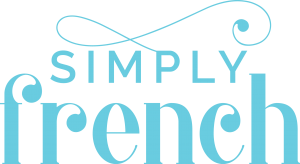 We have a Winner for the Two Free French Lessons

With Christine Camm of SimplyFrenchOnline.com! 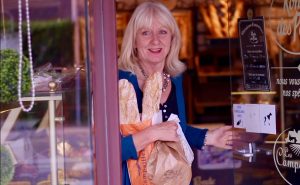 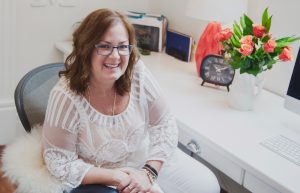 You will be hearing more about our winner in an upcoming blog!

Entries came from across Canada, the US, the UK and as far away as South Africa.

Stay Tuned for the Next Giveaway Draw!

It is coming very, very soon!

← The First Woman Mayor of Paris!And The Winner Is… →