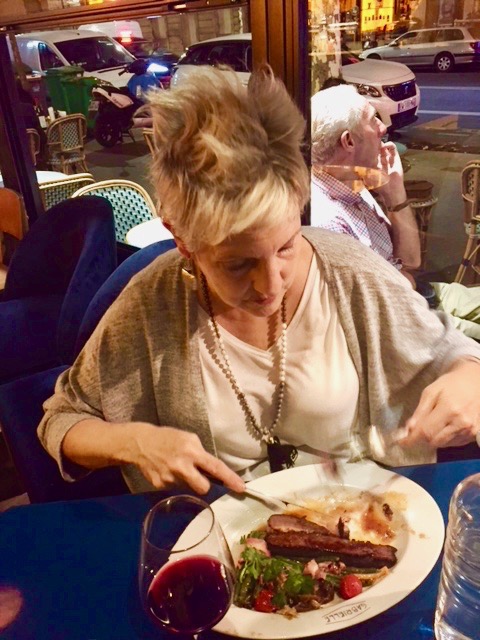 The first time I went to  France I ate my way across the country.

I remember one particular time when I was invited to a family lunch by one of my students.

It was an idyllic French scene. We were about 20 around a large table, al fresco in the countryside. 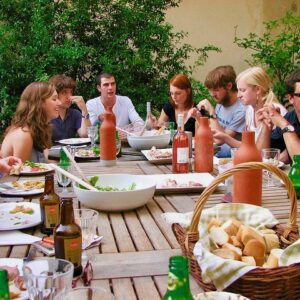 French people value time together and often take a whole day for cooking and lingering over a meal.

Thinking this was the main course, I devoured 16 of these very large snails and at least half a baguette to soak up the butter.

Funny how I remember the exact number but I was used to ordering a small appetizer of 6 tiny escargots in a restaurant. 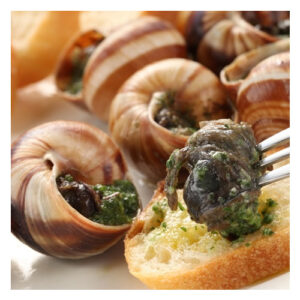 You have probably already guessed the rest.

That was only the first course.  There were nine more to come consisting of charcuterie, chicken, roast pork, lamb, vegetables of all kinds,  numerous salads, cheeses and then desserts, paired with copious bottles of different wines and champagnes.

That lunch which began at noon lasted 5 hours.

Thinking about that day, I am surprised that no one sitting at the table was fat.  Well, maybe our host, my student’s father,  had a bit of a belly but considering their access to such rich food, they ALL should have been obese!

I, myself, in the few months that I had been there, had already gained a few pounds…

The North American Versus the French Diet

I grew up with a mother who worked full days and made meals in a rush.  They were filling but not very interesting.  Remember things like sliced white bread, bologna, macaroni, junket, and jello?  And Campbell’s soups added to everything?

When I got to France in my twenty-third year and was on my own, I was thrust into one of the world’s most refined food cultures, where everything provided a taste explosion. 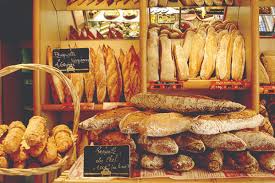 From almost the first day, I never saw a baguette that I did not like,  a croissant that I could refuse or a sauce that didn’t make me want to lick the plate, and sometimes I did when no one was looking. 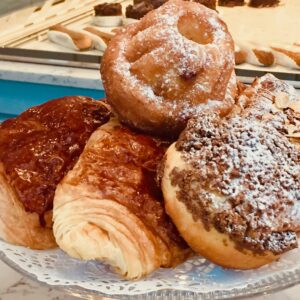 Come on! I could not resist anything here!

Within three months,  my 108-pound frame ballooned to 135 pounds.

(I do not regret a single pound, and anyway, I lost the weight when I got home and went back to North American food.)

Obesity is apparently on the rise in France but mostly among children due to the arrival of McDonald’s and other fast food, and not from traditional French cuisine.

Still, in general, people don’t discuss their weight or what they should not be eating.

There are vegetarian restaurants but I have never heard anyone talk about meat being bad for you.

This would be surprising anyway as they eat pretty much every animal organ in some fashion or another.

We all know this right?

Still, with food and produce of such high quality and taste, why don’t the French gorge like I did so many years ago, and sometimes still do? 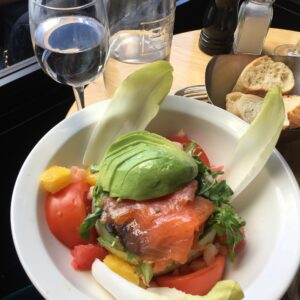 A very “satisfying” lunch I had in Paris!

There is much debate on this subject as habits evolve but I have noticed that the French are more interested in being “satisfied” than being “full.”

Taste and quality are supreme, and as a result, one is able to be satisfied with less.

Like that lunch I had way back when, people eat slowly. They take a little of this and that, and give more time to the business of eating.

However, left alone and unsupervised with some really good French cheese and salami, and a fresh baguette, I might be tempted to eat myself silly! 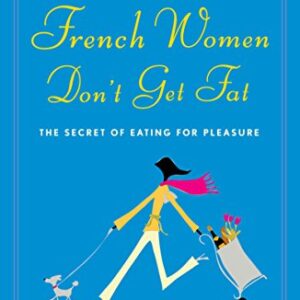 Her premise is that French women love food as much as anyone but it IS all about portion size, taking time to eat mindfully, and walking everywhere.

No one talks about getting their 10,000 steps. It just happens.

Both of these books are great fun!  You can purchase them by clicking on the title links above.

Mireille has a recipe for leek soup that she claims is the ultimate cleanse from overindulging.

I am sure that you all, and especially my French followers, will have your thoughts about this subject!

Please share your comments with all of us below.