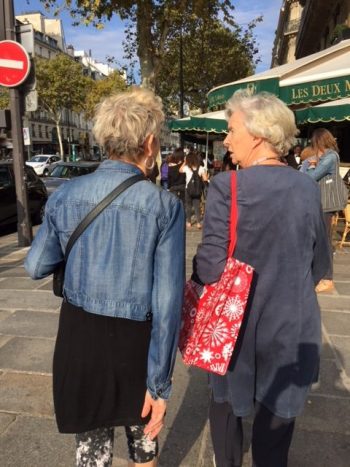 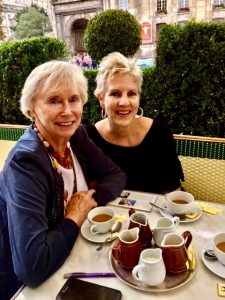 Meet my new friend in Paris, Marita Sakote!  I met this delightful woman exploring one of the most fantastic resources available for visitors to Paris that few people know about!

It’s called Paris Greeters and I found it to be a really great and enjoyable way to see Paris with someone who really knows the city.

Paris Greeters, like Marita, are all volunteers who are knowledgeable about different areas and aspects of Paris. They can take you on what they call  “une balade” or a walk,  touring through various neighbourhoods, or to visit the sites, whatever you want to do.

I was enchanted by the idea so l registered on the Paris Greeters website (see below). They asked me about my areas of interest which included things such as “History” “Architecture”, “Gardens”, “Gastronomy”  and “Daily Life” which is the one I checked off.  Then I made a special request. I added a note that if possible I wanted to be matched with “a woman of a certain age” who I could interview for my blog. Within a few days, I was contacted that they had someone who they felt might fit the bill.  Shortly thereafter, I got a very warm email from Marita, introducing herself and suggesting a time and place to meet.

Marita set up our rendezvous in Saint-Germain-Des-Pres (6th arrondissement part of the Latin quarter) and the location of France’s oldest Romanesque church (580 AD). It is also an area formerly frequented by the literary, artistic, and culinary elite like Simone De Beauvoir, Albert Camus, Pablo Picasso and Julia Child.

As soon as I came up out of the Métro, I saw a woman, yes of a certain age, smiling and waving enthusiastically. And I knew immediately we would hit it off. 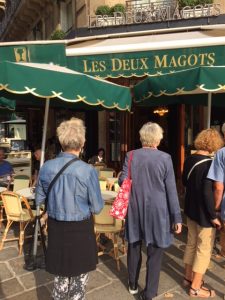 To get further acquainted, we headed across the street to find a table at Les Deux Magots where I learned that Marita is of German descent but has been living in the Paris area since 1974. She is retired, a mother and grandmother, and for the last ten years has been a volunteer at Paris Greeters escorting travellers on walks around the city about six times a year.

Fortified with strong coffee, we began our walk, first touring the ancient church and then strolling through the neighbourhood as we discussed French life and culture. We stopped to look in a book store dedicated to French women writers and another that sells original hand-written letters from people like Maurice Chevalier, Edith Piaff, and F. Scott Fitzgerald.

Wending our way up and down the narrow cobbled streets, Marita led me inside the French Institute library. It houses books and documents going back to the mid-1700’s pertaining to, l’Académie française which is the preeminent council governing the French language. The library itself is a visual treat right out of Hogwarts in Harry Potter, and something I would never have seen otherwise. 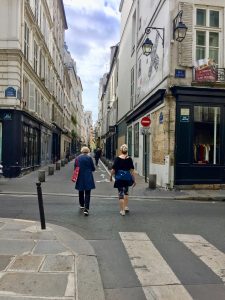 Paris Greeters have 380 volunteers currently. And it’s definitely something different to do that really can make any visit. The best news is it’s FREE. Yes free, although you can make an optional donation to the organization on their site which I did.  The donations pay for the administrative costs of running their service. 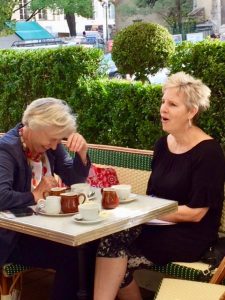 I am so thrilled to now have made a new “gal pal” in Paris, and Marita and I are already planning our next “balade” to another area of Paris I have never properly explored – the multi-ethnic Belleville in the 20tharrondissement!